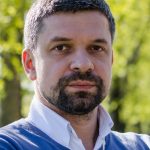 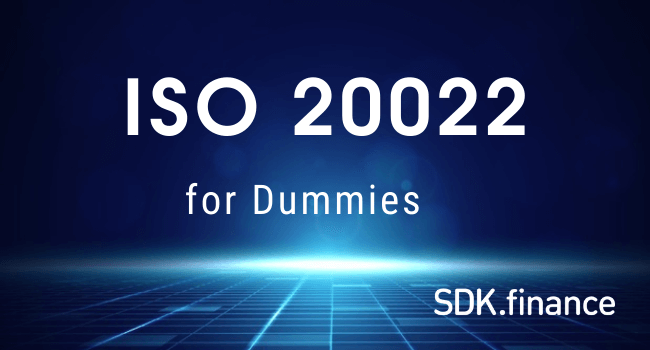 The global payment system does not currently have a single standard to exchange payment instructions between local and foreign financial institutions. The fragmented boundaries between systems diminish interoperability at each intersection, create friction, and increase costs for all members. ISO 20022 will provide a standardized series of rules and practices to greatly improve local, regional, international payments with many anticipated benefits for the industry.

Everything you need to launch your payment product

ISO 20022 is an emerging global standard for sending payment instructions between local, regional, and international financial institutions. The financial standard defines building blocks and design patterns for the development of payment messages through a common platform methodology, process, and repository.

The standardization approach offers market guidelines for exchanging financial data between different financial institutions in various market structures. The resulting models, derived messages, and patterns are published and stored by the ISO 20022 Financial Repository. This flexible framework allows members of the financial communities to define and expand message sets according to an internationally agreed business syntax. 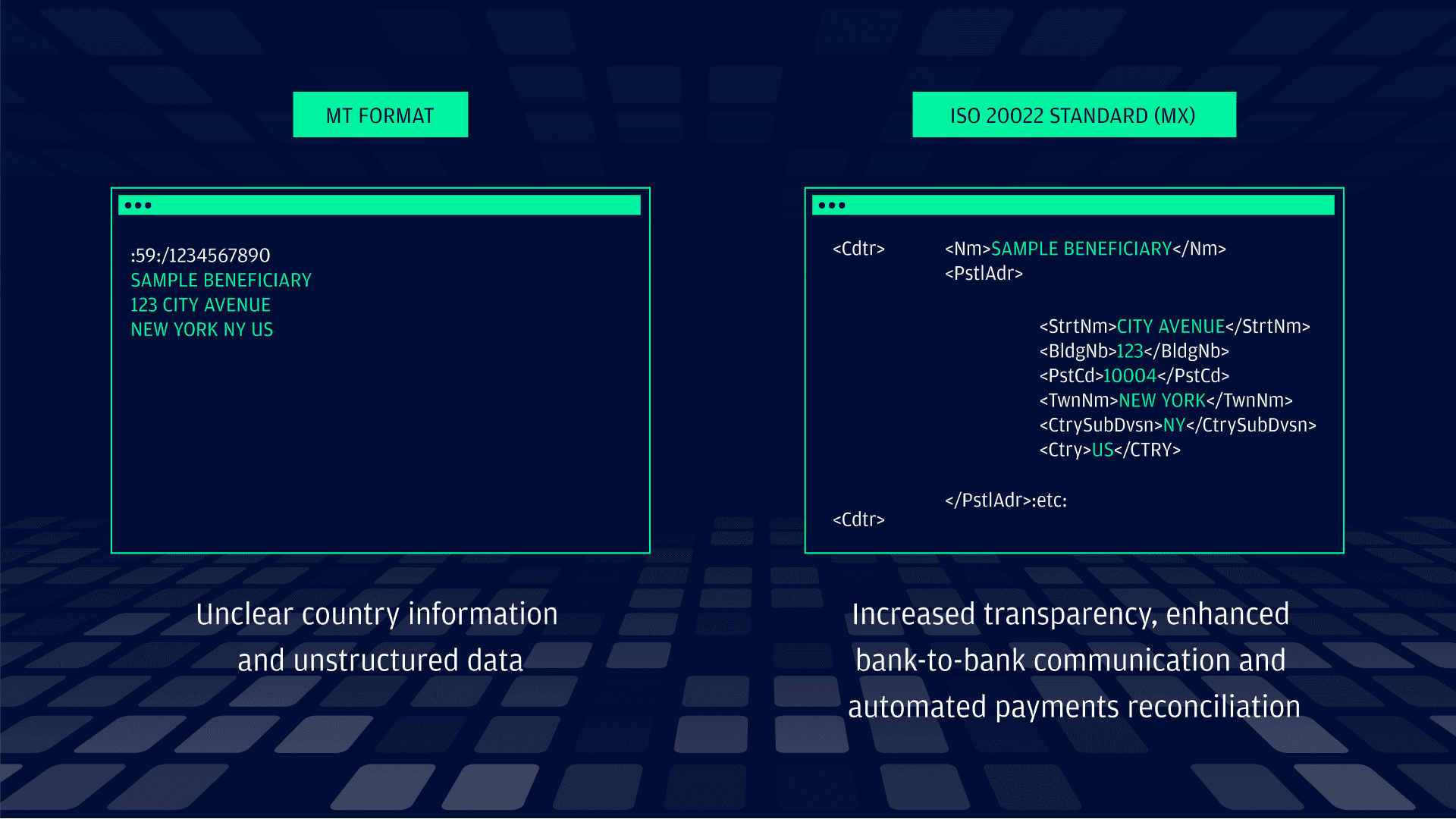 A comparison of XML data within ISO 20022 and SWIFT MT

Even though the international financial institutions have reached a consensus on a standard for financial transactions by means of ISO 20022, the technical development of a default mode of operation is still not concluded. Finding common ground with a single financial standard among network participants and countries with a wide range of diverse existing systems is a monumental task.

Since 2016, network members have formed separate regional task forces to come up with message guidelines for high-value payment systems, cross-border payments, reporting, and others in a productive step towards achieving consensus. These market practice groups have ongoing discussions to define the preferences of local institutions and balance them with the international requirements.

ISO20022 has already been implemented for high-value payments systems (HVPS) in countries that have modernized their payment infrastructures, such as China, India, and Switzerland. The financial standard has also been introduced in instant payments markets in Australia, the US, Canada, and Singapore.

The spotlight is currently on the world’s major traded currencies (USD, GBP, and EUR) and SWIFT. In November 2021, the US, UK, and the Eurozone plan to migrate to ISO 20022 and modernize their HVPSs. At the same time, SWIFT also planned to initiate a four-year-long migration from the current MT messages to ISO 20022 starting with HVPS but decided to delay the change by one year to November 2022 because of the impact of the global pandemic. Around 25 more HVPS systems will adopt ISO 20022 from 2021-2025. 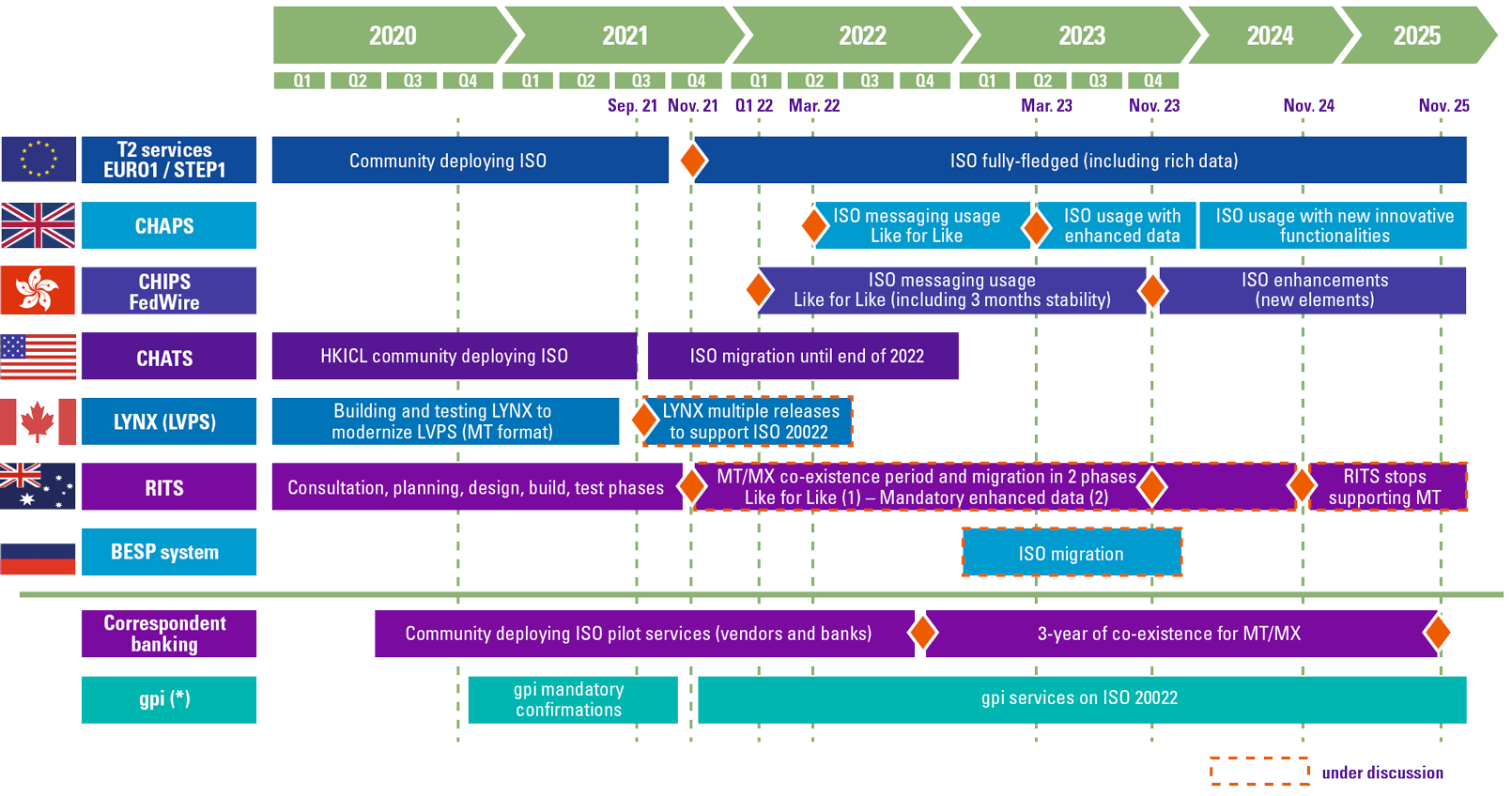 The migration to ISO 20022 will affect most banking processes, from know-your-customer checks and electronic banking to liquidity management and reporting. Given the financial standard’s far-reaching impact, each bank’s success will depend on its strategy and commitment to change. Although banks need to invest considerable time and resources into the migration process, the transition enables a whole new level of efficiency and cost-effectiveness.

Considering the wide variety of approaches in different countries, banks will need to closely monitor and adapt to any changes to the ISO 20022 adoption timelines. Not all banks will be able and willing to implement the standard from the get-go. For budget-constrained banks, the financial industry offers a co-existence period that enables a gradual migration. Another option is to convert existing MT messages to ISO 20022 instructions and vice versa without structural changes to core systems. However, the fast and easy nature of this solution diminishes the long-term technical efficiency gains.

The more banks adopt the technology, the more other market participants will direct their payments through the banks that have implemented ISO 20022. Banks that choose not to migrate to ISO 20022 at all will not be able to offer the same level of services as the competition and will become incompatible with most other businesses.

What Is ISO 20022 and How Will It Impact the Financial Industry?

As a successor of SWIFT MT, ISO 20022 is a better defined, richer, and more functional alternative of payment instructions. The emerging standard improves the quality and consistency of data and enables major improvements in the automation of financial processes and transaction processing.

As SWIFT MT messages have been in the industry for more than three decades, they have become increasingly more complex as companies modified the data they carry to suit their region’s market infrastructure or payment systems. These context differences hinder interoperability and create friction points ISO 20022 aims to solve with a standardized future-proof messaging system.

In addition to the benefits of global message standardization, the ISO 20022 format also provides more benefits for network participants. Due to richer and more structured data, both humans and machines benefit from ISO 20022. Technically speaking, compared with the traditional format of MT, ISO 20022 has some key advantages. It is suitable for non-Latin alphabets, with a character set ten times larger than MT messages, and carries a lot more information.

The benefits come with a price: the new financial standard is not forgiving as each and every character within a message has to be aligned with the specifications 100%. The format is validated at several steps along the communication channel chain on the sending and receiving sides. Even a single missing colon could result in a multi-million transfer being rejected or delayed for days.

Given its promising global implementation, ISO 20022 has the potential to transform current payment services and provide more value to financial institutions and the broader financial ecosystem.

Payment instructions that comply with ISO 20022 contain context-sensitive data. These files contain extended remittance information and structured data to describe and identify the parties involved in the transaction clearly. Combining transaction management with the rich data format creates a greater possibility of global payment innovation in the payment industry. One such example is the payment tracking provided by SWIFTgpi that allows to send fast international transfers and track their location and accrued fees at any point in time.

Interoperability is greatly improved through the ISO 20022’s ability to exchange and utilize information without restrictions, increasing operational efficiency among network participants handling cross-border bank flows. When every participant uses the same technical standards, a similar integration method can be used every time a new participant is added. As the marginal cost of connecting more participants with different technical requirements is lower, financial companies also increase their implementation efficiency. 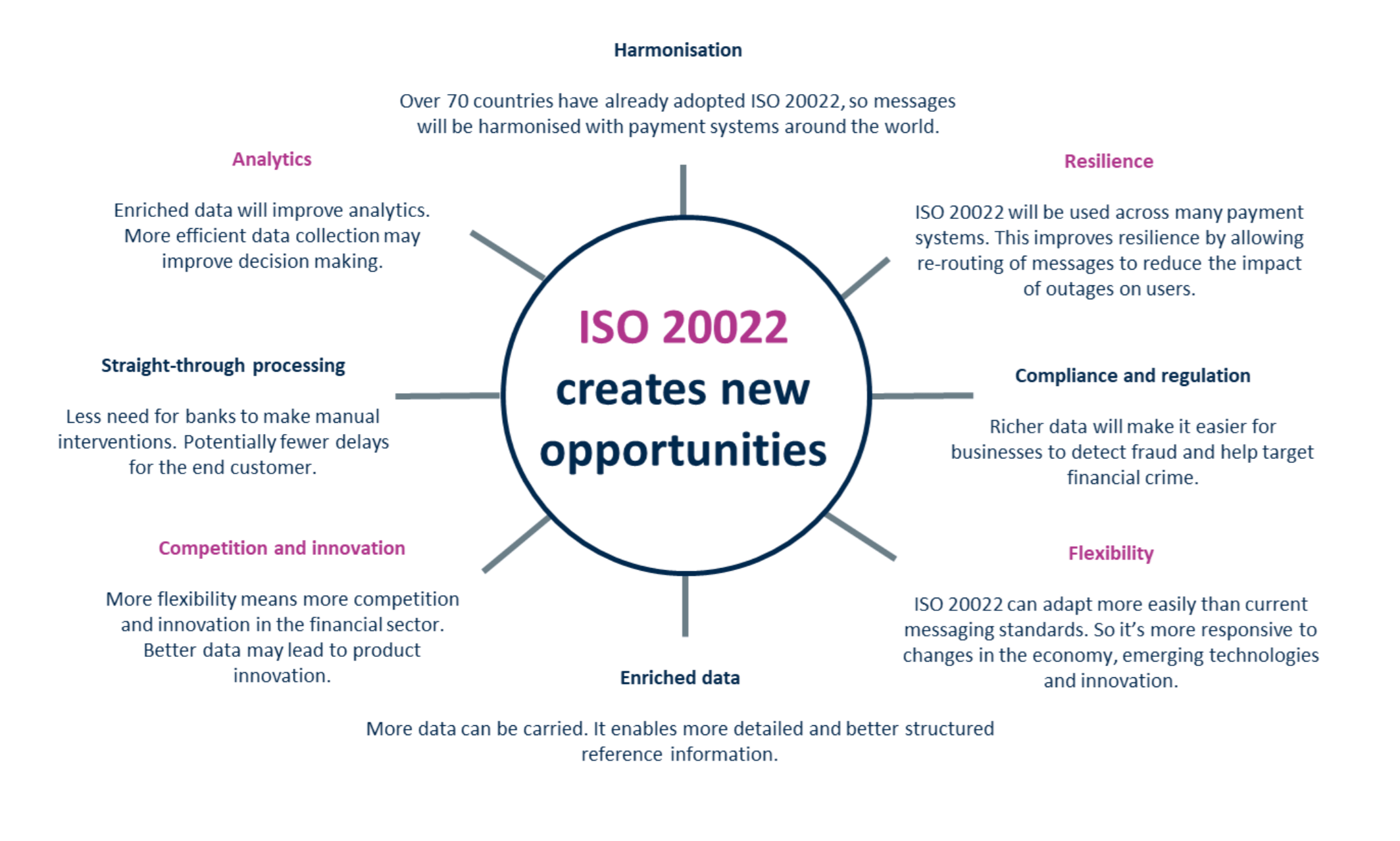 Benefits and opportunities of ISO 20022

Source: The Bank of England

ISO 20022’s extensible language and use of external codes list can be monumental to increasing agility in complying with new regulations, especially for payment processing, monitoring, and reporting functions.

Banks can search for specific data elements within payment messages to evaluate risk. For example, a parameter called “payment on behalf” can be checked against sanctioned customers to prevent potentially fraudulent transactions from going through. The standard will enable improved compliance, enhanced sanctions screening, anti-money laundering, and fraud detection. These processes should become more effective with fewer false positives and more efficient due to the use of structured address information.

ISO20022 – the official website of the financial standard with links to the repository and industry-specific message definitions. It also contains the sign up link for the free ISO 20022 for Dummies book written and offered by the SWIFT Standards Team. There’s an option tos sign up for a newsletter with the latest updates about ISO 20022 adoption around the world.

Bank of England – information and technical resources about the UK’s migration, benefits, and   Q&A about ISO20022.

J.P.Morgan – the website presents an overview of the ISO 20022 migration, benefits, automation, and links to webinars.

The challenge for implementers of ISO 20022 does not lie in consolidating the global migration roadmap. For most financial institutions, the complexity lies in tailoring the strongest implementation strategy to secure the most benefits and mitigate the risks. The greater flexibility provided by ISO 20022 will also provide more opportunities for innovation, better product development, and faster response to industry changes. Each bank needs to leverage the full benefits of the financial standard in accordance with their business models to maximize the returns from their market offerings.

To talk about ISO 20022 implementation in your company

ISO 20022 is an emerging global standard for sending payment instructions between local, regional, and international financial institutions. The financial standard defines building blocks and design patterns for the development of payment messages through a common platform methodology, process, and repository

The migration to ISO 20022 will affect most banking processes, from know-your-customer checks and electronic banking to liquidity management and reporting. Given the financial standard's far-reaching impact, each bank’s success will depend on its strategy and commitment to change. Although banks need to invest considerable time and resources into the migration process, the transition enables a whole new level of efficiency and cost-effectiveness.

What is ISO 20022 implementation timeline in Europe?

In November 2021, the US, UK, and the Eurozone plan to migrate to ISO 20022 and modernize their HVPSs. At the same time, SWIFT also planned to initiate a four-year-long migration from the current MT messages to ISO 20022 starting with HVPS but decided to delay the change by one year to November 2022 because of the impact of the global pandemic. Around 25 more HVPS systems will adopt ISO 20022 from 2021-2025.

ISO 20022 migration is not mandatory from a regulatory perspective, but those that do not act now risk being excluded from international payment systems. 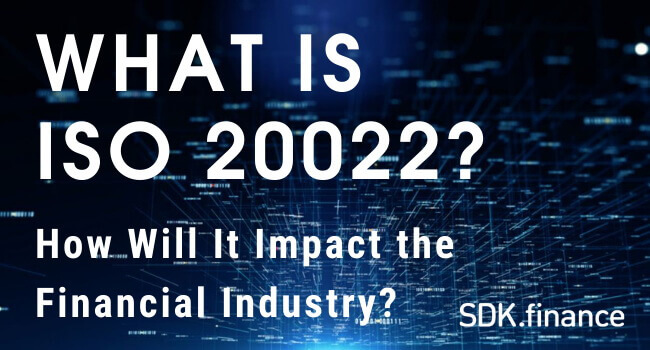 What Is ISO 20022 and How Will It Impact the Financial Industry? 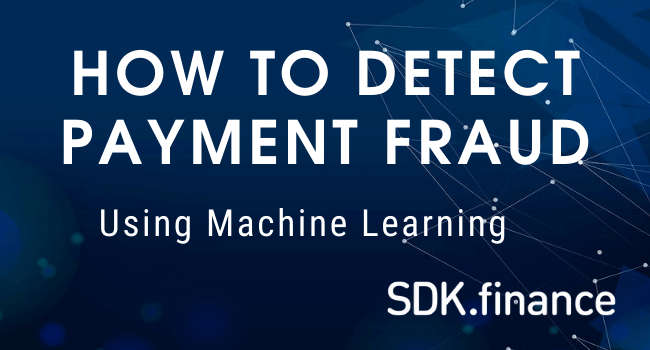